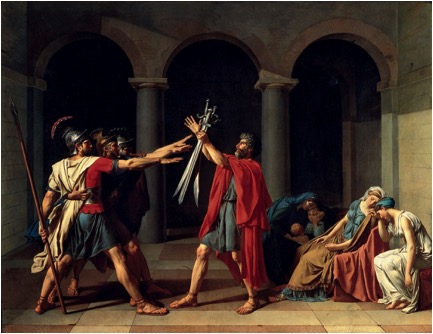 Jacques-Louis David The Oath of Horatii 1784, The Louvre.


Leo Costello, Ph.D. is Associate Professor and Chair in the Department of Art History at Rice University where he has been a four-time finalist for the George R. Brown teaching award.  WIH is looking forward to his upcoming class Revolution and Romanticism: 18th Century European Art. We caught up with Dr. Costello to learn more.

WIH Reporter: Dr. Costello, we are excited about your upcoming class on European paintings during the age of revolutions. You are covering a lot of ground—1700-1850—and in the course description you make reference to the fact that this was an era of extraordinary change. Would you expound on this?

Costello: Yes, well, it’s not just that that period sees the emergence of industrialism, urban society, secularism, capitalism, political revolutions, modern democracy, empires, world war, and global economies—it’s also that the very idea of constant change, development, upheaval becomes an assumed fact of existence. Before this period, most people living in Europe would have been accustomed to expecting that the world, and their lives, would be much the same when they died, as it was when they were born. During this period those expectations themselves are turned on their heads.

WIH Reporter: Give us a dramatic example of how this change that you have described had a profound impact on a specific artist of the time.

Costello: I think the artist J.M.W. Turner is a perfect example. He was born in 1775, as the son of a Covern Garden barber and wigmaker, a true Cockney in the midst of London. By the time he died, not only had he risen through society in a way that would have been unheard of a century before—and become both rich and famous—but think about the things his lifetime saw: The American Revolution, the French Revolution, the Napoleonic Wars, the reform of English government, and the development of industrialism in England which was symbolized in the iron and glass modern marvel of the Crystal Palace and built in the same year he died, 1851.

WIH Reporter: Most of the artists of this century were forced to work for and under the control of authoritarian monarchies. In this environment, were they able to oppose the accepted societal norms? How was this exhibited in their art?

Costello: Yes, in the French Revolution, for instance the work of Jacques-Louis David became a major part of the language by which the monarchy, and the aristocracy were overthrown. Even when a picture wasn’t overtly political in content, it could be radical in style and message. Interestingly, however, David became himself the official voice of the authoritarian regime of Napoleon that succeeded the revolution. Later French artists like Daumier and Courbet would return back to the association with political revolution. Other artists, like Francisco Goya in Spain, had to walk a much finer line politically, based on changing fortunes. Goya’s pictures, even his portraits of the royal family, are notably difficult to interpret in absolute terms.

WIH Reporter: Rococo, Neo-Classical, and Romanticism from France, Britain, Spain are some of the movements that will be covered. We would love to know if you have a favorite and why. Is a specific piece particularly impactful?

Costello: Ah, yes I am certainly a Romanticist at heart. In large part, it’s because these artists were confronting not just the difficult realities of the period through which they were living, but also the awareness that there were no clear answers or solutions to the problems and challenges that history created for them. They were freed from the strictures and rules of the past, but also aware that this left them at times alienated and alone to make decisions about how to create. I love seeing artists grapple with this. I think Gericault’s Raft of the Medusa is a monument to all of these challenges—creating it took him years and came at a tremendous physical and mental cost to him.

WIH Reporter: As an art history professor, enlighten us on some of the lesser-known museums that you find inspirational and enjoy visiting.

Costello: I just took a group of undergraduate students to London for a 3-week course over the summer, so I’ve got a lot of places there that are fabulous. My favorite might be Sir John Soane’s House in Lincoln’s Inn Fields. It’s a very eclectic, beautifully preserved vision of how an architect, collector, artist, and Royal Academician lived in this period. I also love visiting Kenwood House on Hamstead Heath and the Black Cultural Archive in Brixton.

WIH Reporter: Finally, what are you most excited to share with WIH students about 18th Century European Art?

Costello: All of the strange, wonderful, upsetting, thrilling, horrific, and beautiful ways in which these artists confronted the changing world!